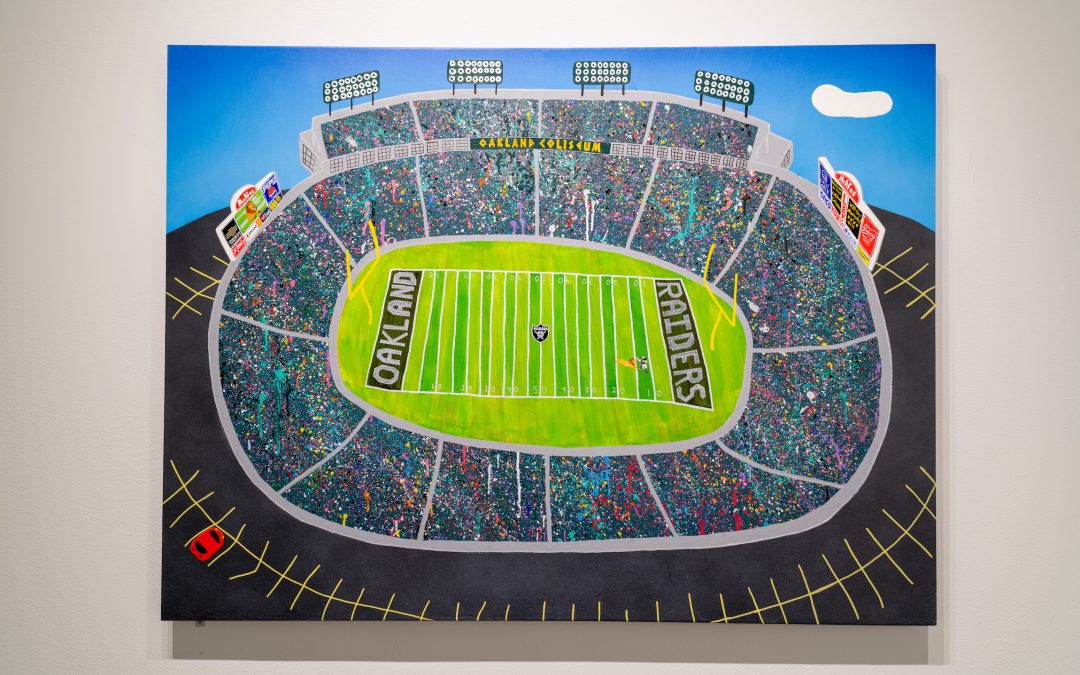 In world of catch-up television and information at your every beck and call, it’s hard to imagine a future without the digital. For artist James Pederson, [MFA ’19] he directs his brush towards this notion of ‘screen time’ and, in particular, the position that spectator sports have in the current media landscape. “It is kind of the last bastion of live broadcast television,” he tells It’s Nice That. “While most video media is increasingly watched on demand, sports can still get large numbers of people to watch the same thing at the same time – I think that has a lot to do with the way people identify with their chosen team’s success or failure.”

James continues to explain how the “drama” of the game is, in fact, more substantial in real-time. And, as an avid sports fan himself, this point of view isn’t coming from a detached observer making assumed speculations. What he likes to do is blend the slow process of painting with the instant and fast-paced nature of television. “I love painting’s ability to slow down the way we look at the world around us,” he says. “Aside from translating the fluid action of sports into a still image, I also use paint to create the images with a variety of textures and a wonky sense of space. Sports can come off as a low-brow subject, particularly for people who aren’t interested in it.” Therefore it is James’ goal to present these visual qualities of the paintings in order to make the subject seem a little less “pedestrian” and present it in a way that’s worthy of artistic contemplation.

Since 2014, James has been focusing his attention on this subject matter. He’s got a bag full of multimedia projects and intricate paintings, all of which are heavily detailed and presented in an unusual perspective. More recently, he’s shifted his focus from the broadcast itself to the interior spaces that surround the television. “I started using interior spaces surrounding television screens with sports broadcasts as a way to give the people watching the game a presence in the image, even though they are not physically present,” he explains. “The larger takeaway from that for me was that I realised I was less interested in the game itself on the athlete’s level, and more interested in the things, people and activities surrounding the game.” When asked whether this is his attempt to decipher a character – a particular type of person that will be watching the game – he states that he’s “not sure” that he thinks of himself as one who is developing characters, “but I do hope to develop a kind of profile for the sports fan”.

Read more at It’s Nice That