What is the shelf-life of an idea? How long do ideas stay relevant or fresh in the way that other perishables have a particular period of time in which they fulfill their original promise or ideal? These questions are not limited to the abstract or philosophical, but rather resonate quite literally as the duration of history we try to engage in the art world expands exponentially. The further we get from the origin stories of art and their often Eurocentric origins, the less space there is in the narratives of art history and its attendant critical thinking; as we have access to new knowledge and new theories of art practice the timeline becomes crowded and we are forced to make room for new knowledge and new theory.

It would be hard to imagine an art history course that does not mention Abstract Expressionism for example, but what about art of the Baroque or Rococo periods? What would we delete to make room? Where do we find space in the story, for instance, for African Art or to open the canon to work by those only now being “discovered”; individuals who were overlooked or marginalized out of art history altogether? And what about ideas? Someone asked me recently about the difference between Formalism and Structuralism. I had to spend some time thinking about that question and stripping away much other knowledge that cluttered the space of my memory to get to the answer.

Both Formalism and Structuralism grew out of literary studies in the early 20th century and were borrowed and adapted by the art world subsequently. Various art forms (film and painting for instance) have their own versions of both. But generally, I said Formalism is local, in other words, restricted to the boundaries of the object and focused on its material properties. The object in this sense is sovereign and untouched by culture speaking only of and to itself. Structuralism is concerned with the object beyond itself, in the context of culture, identity and other objects or undertakings that utilize similar approaches and materiality. It is, in a way, a bit like the rhizome, acknowledging a connection to other systems utilizing similar structures and methods.

Of what use is this knowledge in the greater scheme of things, I wonder. And how does such theory impose itself (or not) in the viewing of work outside of the traditions that such theories speak to? I had the opportunity to see the work of Otobong Nkanga recently. Nkanga was born in Nigeria and is currently based in Antwerp, Belgium. Her work “explores the contested social and political histories of colonialism, with a particular focus on the relationship between Africa and the Western world.” Her visually rich and compelling projects explore the way in which valuable natural resources are transformed into even more valuable commodities, often coursing through underground and transnational economies to arrive at the hands of consumers. Such objects often belie their origins in places like Nambia or Nigeria, as they are alchemically metamorphose into seductive marketable products. 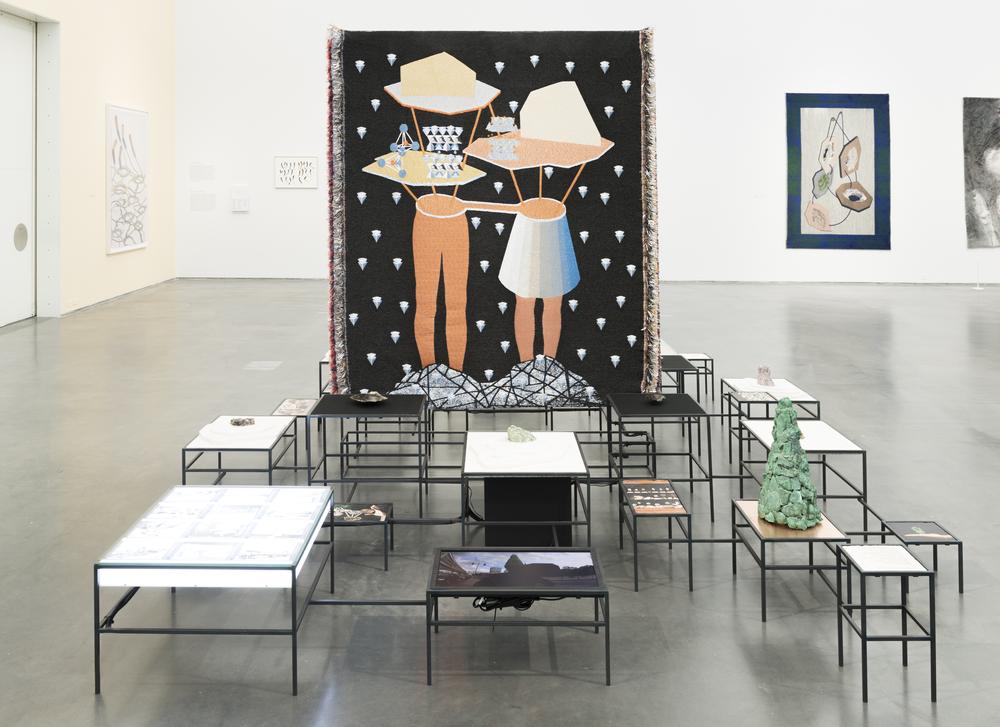 In exhibitions such as To Dig a Hole That Collapses Again, Nkanga employs drawing, installation, performance, photography, and other means to tell stories that illuminate her ideas in poetic and articulate forms that both teach and enlighten the viewer, while seducing both the eye and heart as well. This is perhaps more important that a conversation about Formalism and Structuralism, but contained within her work are all the ideas present in both. We can use Nkanga’s work to prove the validity of such arch ideas and the reverse is also true. Such ideas are proven by the work of contemporary artists, whether by intent or by circumstance. Whatever the case, the larger narratives of art are necessarily making space for work that challenges prevailing notions of both art history and of art practice.