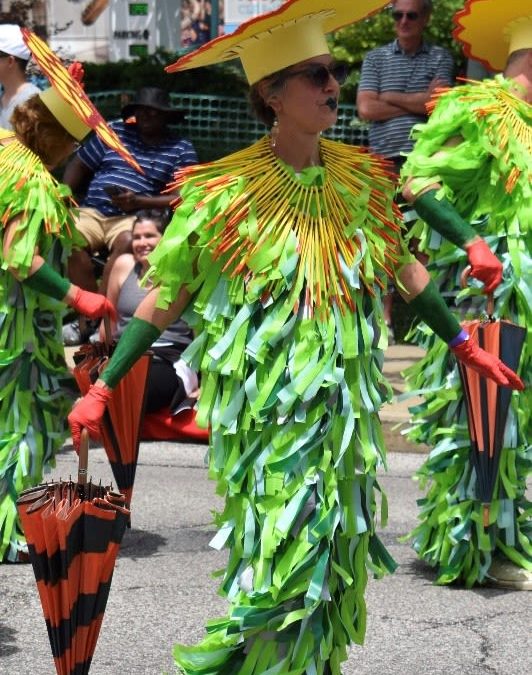 Cleveland Heights resident Debbie Apple-Presser [BS-Art ’79] never shied away from trying new things and following unexpected paths. She made coats out of vintage fabrics, opened one of the first art galleries in Little Italy and worked as a lecturer and instructor at the Cleveland Museum of Art.

These days, in addition to making clothing, Apple-Presser is also heavily involved with the annual Parade the Circle in Cleveland and runs a studio in Medina for people with developmental differences.

As a small child, Apple-Presser knew she wanted to be an artist.

“I was born this way. I always knew, I didn’t know, but I knew. This was the path I was put on. I remember going to the beach with my family at Mentor Headlands. There were all these bathing suits with different patterns. I don’t know why, but I was just drawn to them. I went home and I had these rocks that I just started painting the colors and patterns I saw on people’s bathing suits,” Apple-Presser said.

“I found wood, cement and nails and yarn, made my own loom and wove patterns,” Apple-Presser said.

Apple-Presser, who grew up in University Heights, said her parents encouraged her interest in art and helped foster it.

“One of my first art memories was going to the Cleveland Museum of Art with my dad. One of my favorite paintings was (Thomas Cole’s) ‘Vision of Shroon Mountain.’ It’s a mountain scene with a lot of Native Americans hidden in it. My dad would point out that there is other things going on beyond what you see. He pulled me in with the curiosities,” Apple-Presser said.