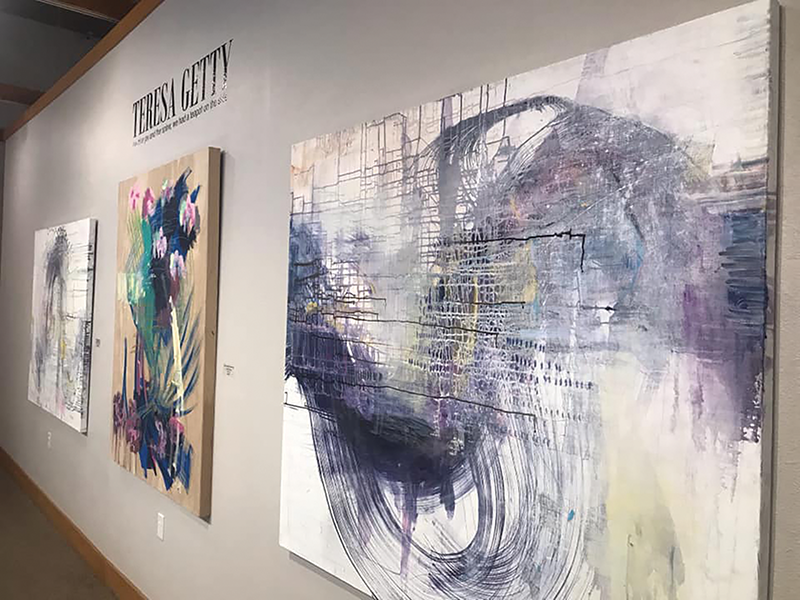 VISALIA – Artists draw from a variety of places for inspiration, including other artists. That is why Arts Visalia chooses to occasionally feature artists from outside of the area. This month, the gallery is showing the paintings of Seattle artist Teresa Getty [MFA ’07].

Getty had sent a note to Arts Visalia saying she kept current with the galley and wanted to see if she might be able to display there. Howard jumped at the chance.

Getty has seen her own share of difficulties in life and that is why she perceives things as she does, Howard said.

Getty lived in Guam, Georgia, and California as a child. Although at a young age she perceived herself as becoming a doctor or scientist, she chose rather to delve into art receiving her BFA from the Art Institute of Chicago and her MFA from the University of Wisconsin-Madison, where she later taught.

The mother of a daughter with progressive scoliosis, the struggles reveal themselves in her work, Howard said.

According to Getty’s biography, each of her paintings has a story that begins with an everyday experience, a current event, an experience shared with her daughter, or simply a looking and seeing moment. While she works, memories surface. The work walks itself back into the past: memories, some peaceful, some dark. Without censorship, she allows them to flow into her mark, into her responses of lines and color.

Getty lost her mother last year, and that shows in some of her most recent work as well, Howard added.

Read more at the Sun Gazette