Lothar Baumgarten, a German artist living in New York, dwelled for eighteen months with indigenous people in the forests of Venezuela and Brazil in the late 1970’s, with only cameras, film, art supplies, and whatever else fit into a single backpack accompanying him, having no contact with the outside world. He shared his paper, pens, and watercolors with the Yanomami, and over 500 drawings emerged from people who had never encountered the modern world. Baumgarten recorded and filmed them, native people who are vanishing as culture overtakes nature and their habitat is destroyed. He explains:

There are ambient sounds for forest rituals, among guests and hosts, commercial exchange dialogue, which is dramatic and exited. They don’t have money but they do meet and promise to exchange things. They are always repeating. It’s very elaborate. All the things they do they repeat every day, their Shamans’ chant, as they have no written language. 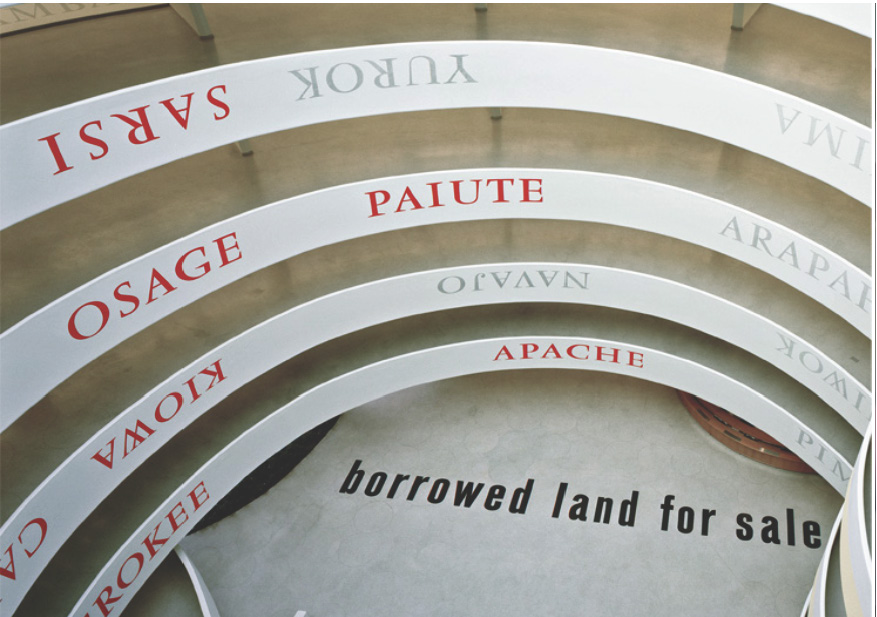 He is probably best known in the United States for his 1993 show at the Guggenheim, AMERICA Invention, (1985-88), in which 75 names of native North and South American societies in geographic order were printed on the interior of the museum.

When he mounted AMERICA at the Guggenheim, he was intrigued by Frank Lloyd Wright’s building and saw it both as a “pumpkin with no right angles” and a Theosophic structure. He remembers:

When I was invited, I said I’d like to transform it into a globe and fill it with continents… a political statement to represent an equal south and north. It was very site-specific, involving an analysis of a place and space. If the Guggenheim had been in Europe, I wouldn’t have done this piece. It was really bound and ground in America.

The tribal names inscribed on the walls of the museum were largely a product of the interpretive efforts of the colonizers; western explorers and anthropologists transcribed the lingual sounds of the people they were subjugating.

Such artists as Baumgarten raise the issue of self-representation, asking who speaks for various groups and how history shapes a sense of identity. Who cares? Who cares about this work and why does it matter? Who gets to speak for a community?

According to curator Mary Beth Jacob, curators are “care-takers of art.” But artists care as well. In contemporary art we see numerous examples of gestures, gifts, generosity, and care-taking, as well as sharing of resources and meals. However, those actions and strategies are not always an endpoint in and of themselves, but rather a means of creating discourse.

The Canadian media theorist Marshall McLuhan achieved a kind of cult status in the 1960’s with prognostications and deeply thoughtful essays about mass media, culture, and the earliest impulses toward globalism, which were, mostly for him, evident in mass media and in television in particular. McLuhan popularized the term Global Village in a number of writings about technology and culture. He described how the globe has been contracted into a village by electric technology and the instantaneous movement of information from every corner of the globe to every point at the same time. In bringing all social and political functions together electric speed, broadcast television in his time, but also telephone, radio, and other media, heightened human awareness and social responsibility to an intense degree. McLuhan does not suggest that the new global village would be an ethical utopia wherein the rapid spread of information would somehow create harmony and level the playing field for all cultures. Actually, he was less optimistic than that by far, predicting that such globalization would actually cause anxiety and stress; bringing to light the darker impulses of colonialization, cultural inequity, and other damaging truths.

Artists are not a homogenous population; they are not all the same. However, we can note, among contemporary artists an overwhelming sense of care, of empathy, and compassion. Marshal McLuhan’s influence on contemporary art is worth taking note of here.