Seeing is Forgetting the Name of the Thing One Sees is a book written by Lawrence Weschler in 1982 about the West Coast conceptual artist Robert Irwin. The book explores the dislocation that occurs in the face of Irwin’s early work with light and space. 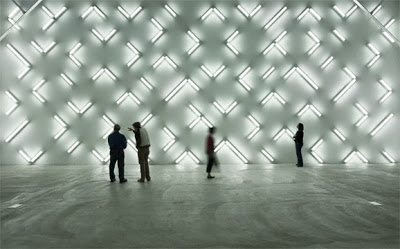 His conceptual installations of the 1970’s used pure light to alter the viewer’s perception of the space it inhabited to the extent that one often misplaced the language necessary to accurately describe such an experience. On the one hand, the viewer knew their experience through physical engagement or embodiment of the work, but on the other hand, one often lacked the proper cognition to turn such knowledge into language.

The general project of connoisseurship, as it pertains to understanding art, is to unravel the Gordian knot of perception and articulation, to encourage understanding and further to enunciate what one experiences when confronted with often vexing works of contemporary art. The word connoisseurship comes from the Latin cognoscere, “to know,” which on the surface seems to be at least one function of an audience: to know what has been collected and put before them. Knowing implies understanding, or at the least, experiencing an event or phenomena with some sense of intimacy. There are, of course, at least two types of “knowing:” the embodied, experiential way of knowing, and the intellectual, critical knowing generally associated with scholarship. These two approaches are the polar ends of a spectrum across which we come to understand and differentiate works of art. Susan Sontag, speaking about image making in On Photography, states:

Picture-taking has been interpreted in two entirely different ways: either as a lucid and precise act of knowing, of conscious intelligence, or as a pre-intellectual, intuitive mode of encounter.

In short, one manifests itself as an intellectual response; the other as a sort of “gut reaction.” Both intellectual responses and gut reactions may be relied upon in order to defend matters of relative taste and style, but discerning the relative or quantifiable value of works of art with any sort of authority beyond personal preference (gut reaction) requires certain particular knowledges. These include the histories of similar work, the framing devices and context of the exhibition or other venue, and the author’s intent. When these elements are obfuscated or obscured, the object itself—the work of art—becomes unknowable beyond its formal or material qualities, and thus beyond the limitations of “pre-intellectual” knowledge.

This manifests as a kind of resistance, as the objects presented for contemplation collectively resist knowing (or connoisseurship). In a field that is unsure of its own histories and boundaries, or whose parameters have not been adequately excavated, that unknowing is further exacerbated, and connoisseurship, as a path toward greater knowledge and discourse, is impaired.

In her essay What About the Audience?/What About Them?, the film scholar Tamara Harvey notes of connoisseurship that it:

Connoisseurship, then, might be described as one desired outcome of any art form. It is the phenomenon in which literacy grows through the collaborative efforts of curators, makers, and finally audience members and patrons. However, audiences can react only to what is offered for their consumption by the institution. In other words, the passivity of the audience is assumed: their role is generally to receive the work and value it with their attendance and other methods of support. Thus connoisseurship is limited in scope to the availability of materials institutionally supported or presented for contemplation by audience/spectators. Thus connoisseurship builds around a set of “texts” predetermined by the institution.

How do we become more actively engaged in such conversation then? As with work like that of Robert Irwin, work that is often inscrutable and opaque on its surface, our job as viewers is to dig in and follow the clues that artists leave for us. What are they reading, watching, seeing… what are the inspirations and what is the intentionality of the work. That will lead us hopefully to a kind of understanding and ultimately, if we are lucky, a kind of knowing.