Art is a wound turned into light.-Georges Braque

As we continue to face a seemingly endless string of traumatic events, I sense that the role the arts can play in healing becomes an even more pertinent question. Last month I was walking in New York City and found myself on Christopher Street, near the small park where a sculpture by the artist George Segal stands. I had not been there in years, but immediately remembered why the statue is there and what precipitated its installation. Opposite the park sits the historic Stonewall Inn, which in the late 1960’s operated as a gay nightclub. Raids of gay clubs were common at the time, so in an effort to keep such raids at bay the owners of the Stonewall made regular payoffs to local police. However, on June 28th, 1969, NYPD arrived at the club in an attempt to raid the premises. Patrons fought back and what is described as “the Stonewall Riots” lasted for a number of days as patrons and those in solidarity protested the tactics of oppression aimed at their community. More protests occurred as a group of activists organized the first gay and lesbian march, from Washington Square to Stonewall, and the events that followed are often credited as the genesis of the gay rights movement in the United States.

Which brings me back to the sculpture by George Segal that stands in the park opposite the Stonewall Inn, commissioned to commemorate those events. 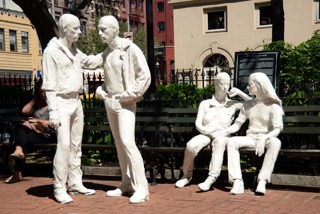 Such monuments or works of public art are intended to both insure that the events they honor remain in light, but also to somehow heal the wounds of such events. We the viewers are assumed to transcend such trauma through the experience of the work of art. That is true according to recently published studies in the both medical and scientific journals; witnessing art speeds recovery from illness and trauma, and promotes a general sense of well-being and health. But what seems to be even more empirically provable is that it is the doing of art that actuates significant change in individuals coping with trauma and violence. A recent study (published in 2012 in the journal Stress and Health) noted that individuals tested while in the process of making art, or creating images or objects, showed “positive neuropsychological changes.”

So, given the “disorientation following massive collective shocks—wars, terrorist attacks, or natural disasters” (see Naomi Klein, Shock Doctrine), or other such cultural disruptions that threaten our sense of well-being and safety, what can Art really do? If we think generously about all of the above, we get the image of a circle in which, possibly, artists heal themselves through the work they make, while often making works of art that heal others. Given the enormity and weight of recent event, this may seem insignificant, but what else is art if not a leap of faith generally? The Segal sculpture has been defaced numerous times yet it still remains a healing force in the shadow of Stonewall. As the first piece of public art publicly dedicated to LGBTQ rights, it was completed in 1980 and was intended for its current site in New York, but seemingly proved too controversial for the city. It was instead installed in Orton Park in Madison, Wisconsin from 1986 to 1991 before finally moving to its permanent home in Christopher Park, back in New York City.

I am anxious to see how contemporary artists respond to the trauma of our times, if our contemporaries have the courage to speak truth to power beyond protests and outrage, but with their creativity as artists in the form of visual culture. Making, witnessing, and thinking about art is an affirmation of life. I am hopeful that we will begin to see the fog of trauma give way to the spirit of creativity as a means for coping with the wounds of the present era, and turning those wounds into light as George Braque suggested.