From poles to polls: Community art project gets out the afghans to get out the vote by Käri Knutson 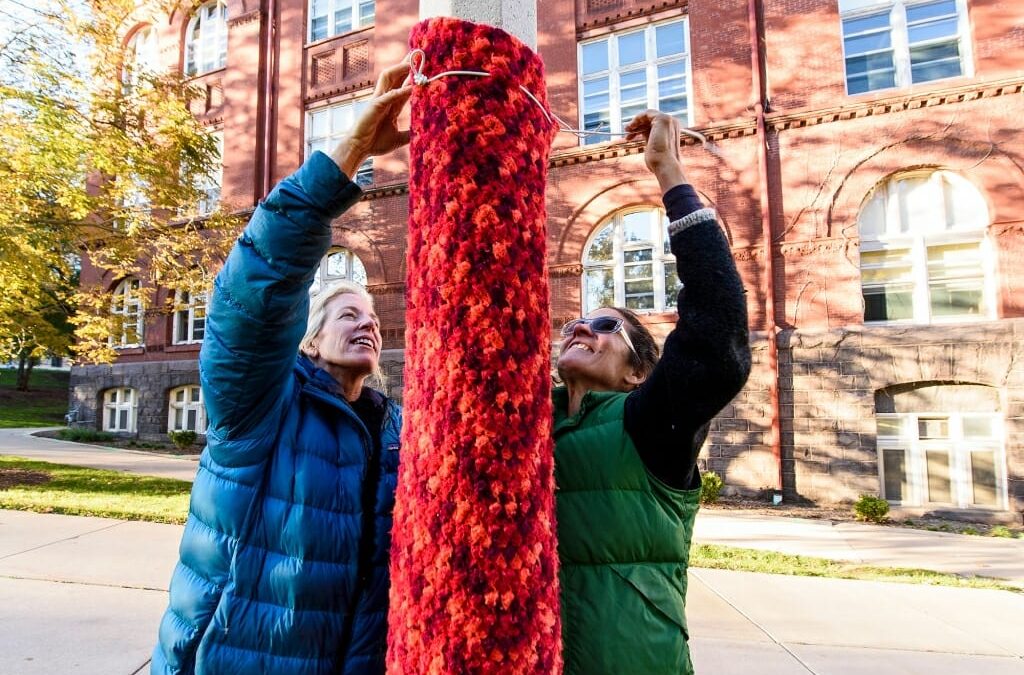 The Arts + Literature Laboratory is more than a physical space on the city’s east side. It exposes emerging artists to different ideas and helps those artists to share their work with the community.

You see a lot of interesting things on Bascom Hill.

A badger dressed in a graduation cap and gown.

A flock of flamingoes.

It’s part of “Women Take the Polls,” an art project designed to encourage people to vote. Unlike robocalls, postcards, and commercials filled with accusations – the “yarn bomb cozies” aren’t telling you who to vote for. The color scheme is definitely liberal, although the project is non-partisan.

This act of “craftivism” is the idea of artists Kelly Parks Snider and Chele Isaac, an alum who got her masters of fine art in 2008.

They got a little help from the Dig & Save at St. Vinny’s where they found donated afghans. At $1.25 per pound, the price was right.

A diverse group of women ranging in age from 9 to 86 gathered at the Arts + Literature Laboratory in Madison to cut them apart and re-fashion them as a salute to the original love and labor that went into them.

“It has been super collaborative which is the way grassroots things work best,” Isaac says.

Isaac added a personal touch by donating part of a cream-colored blanket that was given to her as a wedding gift. It had seen better days before her dog tore a hole in it.

“Moon Pie is such a sweet boy,” Isaac says.

The project’s sponsors include UW–Madison’s Department of Art, Arts + Literature Laboratory, the League of Women Voters of Wisconsin, Arts in Action, and BLINK! Madison Arts Commission.

Read more at the School of Education News