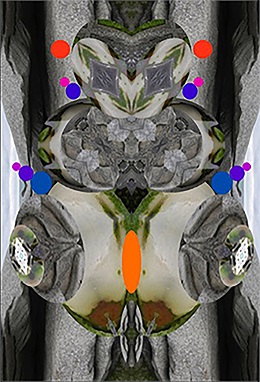 Perhaps the best way to experience Anne Marie Karlsen’s [MFA ’79] art is to ride the Red Line Subway to the North Hollywood station and take in the giant mosaic murals she created two decades ago.

Those who want a broader survey of the artist’s work will get a chance starting this month during an exhibit at the Santa Monica College Pete & Susan Barrett Art Gallery.

“Public Displays of Artistic Expression” — a survey exhibition of Karlsen’s studio art work and images of her public art commissions — opens Tuesday, February 20, and runs through Saturday, March 24, with a gallery reception on Saturday, February 24, from 5 p.m. to 7 p.m.

The exhibition — which showcases Karlsen’s use of collage, painting, illusionism and printmaking — shows her “re-orientation of studio methods to her larger scale of public art projects, and how siting and audience can determine content,” said independent art historian and curator Gordon L. Fuglie.

“A bright thread running through Karlsen’s studio work done in a variety of styles and media is what she calls ‘my autobiographical inquiry,’” said Fuglie.

“A child of Norwegian immigrants, her identity becomes a conduit for connecting to important subjects, including ethnic and cultural legacies, gender issues, social topics, mythological archetypes, and the cumulative weight of history and culture.”