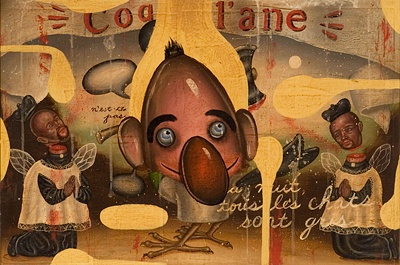 Text and art rarely interact with one another in the art world, but University of Wisconsin art professor Fred Stonehouse believes it is possible for the two to intersect.

At a gallery talk held at the Madison Museum of Contemporary Art Feb 2, the professor offered his feedback and analysis on several pieces in the “Art/Word/Image” exhibition. The exhibit currently on display, includes Stonehouse’s own painting titled “Kilroy-Coq-à-l’Âne, 1999.”

Stonehouse recently led a graduate seminar at UW titled “Word and Image,” which aligns with the exhibition, featuring an array of contemporary art pieces that integrate art with words.

Stonehouse’s discussion focalized around this topic, as he stated his personal interest in the interaction between language, text and art. He delved into the malleability of these different forms, where the boundary between one and the other may become blurred.

Read more at The Badger Herald