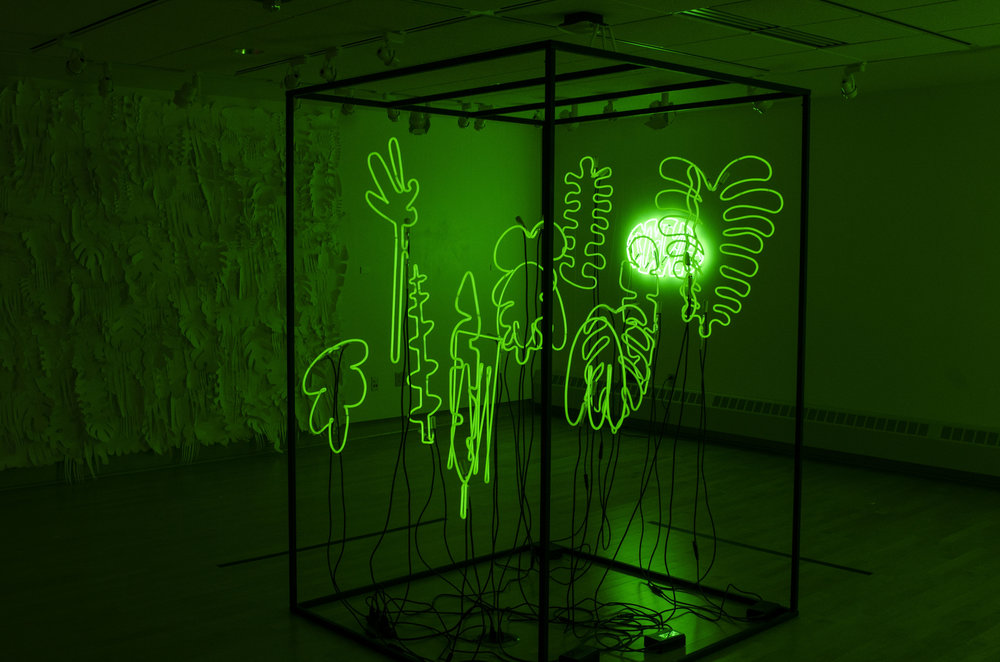 If the possibility that neon can soothe has never occurred to you, step into Ben Orozco’s show Tropicalia, on display through February 2 at the Memorial Union’s Class of 1925 Gallery. The pieces that make up the show all riff on the shapes of leaves commonly seen around the Miami area, where Orozco was born. His family moved to Mt. Horeb when he was 7, but he still spent a lot of his childhood visiting south Florida.

The centerpiece of the show, “Tropic V,” uses 13 different leaves, all rendered through playful green outlines, and suspended within a metal cube-like structure, rather than mounted on the wall. The gas inside the tubes grows gently, and because of the way the piece is constructed, viewers can walk all around it, watching the rows of leaf shapes layer over each other in ever-changing ways.

Orozco, a UW-Madison senior, began making neon pieces a couple of years ago as a way to add a challenging physical dimension to his work as a graphic designer and photographer. It especially builds on the fascination he developed with photo editing in high school. “It was a really fun way to create different realities,” Orozco says. “I wasn’t really interested in traditional photography, I was more interested in being an art director and being able to make these realities. A lot of what I would do would be based around doing some studio photography and making it hyper-realistic, hyper-graphic, taking it out of what we feel was everyday and making it…just something of its own, kind of.”