Estragon: We always find something, eh Didi, to give us the impression we exist?
Vladimir: Yes, yes, we’re magicians.

We are being asked to hold much these days; in our hearts and in our heads. It’s a lot to ask, to hold so much information, so much trauma and violence, so much history and so much present. We are worn down by it, and yet the faucet is always open; more of everything comes our way in a constant flow of images, ideas, sonic dissonance, and the prolonged discourse of culture and everyday life.

Peter Reinhart, The art and craft of bread

This past weekend I made bread, and I was reminded of one of the first TED Talk videos that caught my attention some years ago (before TED Talks became a bit predictable). It was Peter Reinhart, a theologian and baker, who spoke about the simple act of making bread and the great faith that same act inspired. Making bread requires faith in alchemy, faith that the recipe, the handwork, and the subsequent baking, faith that will conspire to something more that the sum of the parts. That through alchemy we will be provided with something nourishing and esthetically pleasing as well.

Alchemy takes place in the existential, elongated pause where a seemingly magical process of transformation occurs, when through process multiple elements combine to create something new. Such as when photography paper is immersed in developing chemicals and slowly the face of a loved one is conjured, or when yeasted dough rises and in fire becomes bread, that is alchemy. Alchemy occurs in a forced pause, while we wait and hope. And in that elongated pause we are confronted by our own faith (or lack thereof) that the process will work, that the glaze will melt just so or that the bread will rise and crisp up in just the right way.

Faith; to have faith, to be in the moment, to be accountable, to be present.

Waiting for such transformation, such unveiling, transforms us as well.

I was very excited to see the Mark Bradford exhibit at the Venice Bienalle this summer. Bradford, an LA artist, is the son of a family of hairdressers whose work relies on “the local” from materials found around salons as well as video, installation, and photographs of the detritus of urban life in LA. He states in regard to his work:

Think about all the white noise out there in the streets: all the beepers and blaring culture—cell phones, amps, chromed-out wheels, and synthesizers. I pick up a lot of that energy in my work, from the posters, which act as memory of things pasted and things past. You can peel away the layers of papers and it’s like reading the streets through signs. 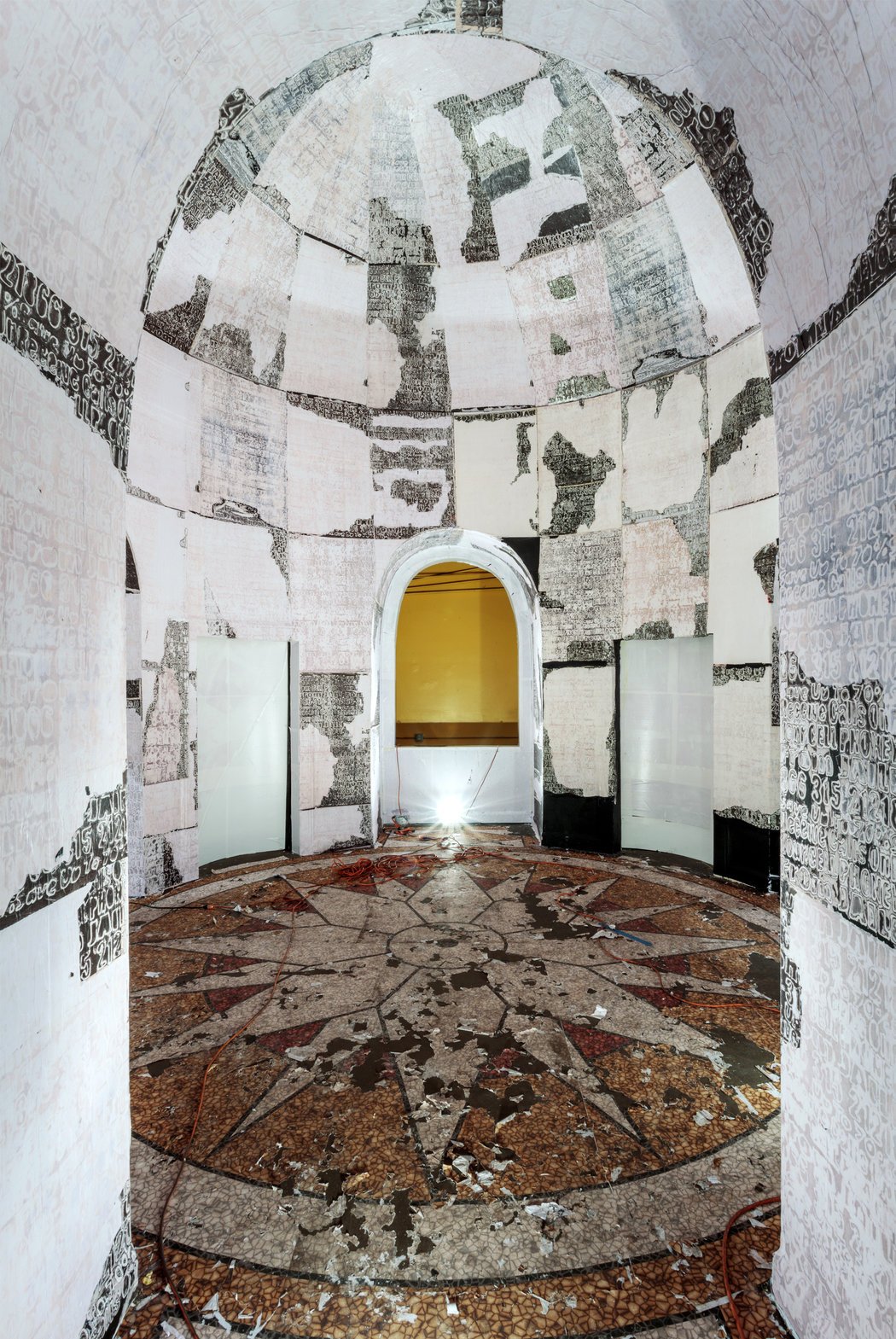 I had great faith and great anticipation that this work would be transformative. Mark Bradford was the single artist chosen to represent the United States, and Bradford had spoken about his plans for the US Pavillion at length prior to the opening. Many others have also weighed in, and there was considerable expectation that this would be a transformative project.

Bradford notes about the central dome:

This a Jeffersonian-type space, something you see in state capitols. I wanted it to feel like a ruin, like we went into a governmental building and started shaking the rotunda and the plaster started falling off. Our rage made the plaster fall off the walls.

He wanted to transform the space and, by extension, that we the viewers would be transformed, as well as, perhaps in the most current parlance, that we would be “woke,” raised from our complacency by his installation and paintings.

So, are we transformed by any of this? Is it possible to be transformed in this time of so many diversions, so much vying for our attention?

When I set out to make a loaf of bread earlier this weekend my expectations were quite low. I simply wanted the process to work so I could share that small gesture with my family. And perhaps I also wanted to create a moment of repose and esthetic pleasure.

Inside the din of contemporary culture we still have to find a way to exert our existence; make bread, develop a photograph. To endeavor to create a transformative work of art that marks our time here on the planet as Mark Bradford did in Venice, is a huge leap of faith, one that is part alchemy, part labor, and taps into a collective longing for meaning.