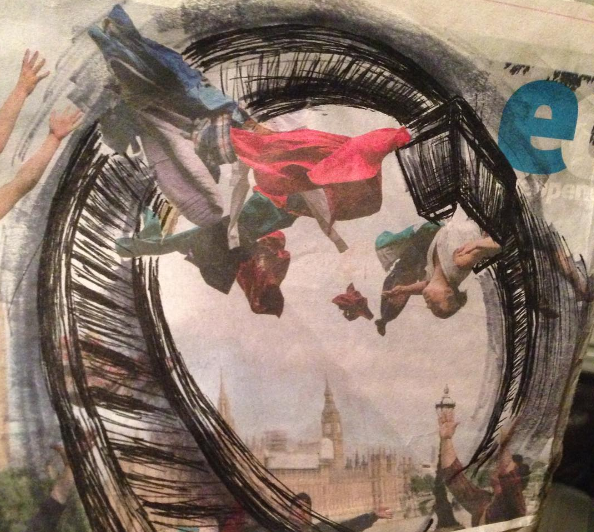 Remember that broken necklace at the bottom of your jewelry box?

Mid-drawing, Brody Rose [MFA ’05] fixated on an image in the Washington Post Express, trapped in the trance of creating. He did not want to leave the Metro. “I’m probably the only person on the train who doesn’t have a problem when there’s a delay,” he says.

An associate creative director at HDZG, Rose started drawing in 2010 to fight the nervous knots in his stomach that came when he began the high-pressure creative job. He was diagnosed with depression in 2000, and he wanted to do something productive on his 30-minute commute from Dupont to Rockville.

“When you’re in a depression, everything is sort of glossed over,” he said. “There’s no spark that kind of ignites the creativity.”

So Rose embraced a new puzzle: Fitting a roller coaster into an image from the Washington Post Express. Sometimes, he placed pictured people in the cars. Other times, he carved the landscape with the coaster’s loops and curves. He only deciphered his drawing’s meaning upon completion.

Drawing was fun, relaxing, and best of all, low pressure. If he made a mistake, there was always another copy of Express nearby. “It was a life changer, truly,” Rose said. He grew to love his mornings on the Metro.

Read more at the DCist