For JR on his 16th birthday-

We don’t get to choose what moves us or when we might be moved. I have often found myself drawn to works of art that, intellectually, I have no interest in or even that I find antithetical to my own esthetic. I have found that work that once angered me or made me deeply uncomfortable later becomes a part of my life in unexplainable ways. Such work does not change, I change. Somehow, whether through an epiphany or a slow erosion of my resistance by other means, my relationship to the work that had once evoked strong negative feelings evolves into something else, an understanding of sorts but more likely a gut response, completely detached from the intellectual or the rational.

I don’t recall when or why I was drawn to the work of the painter Cy Twombly (who died in 2007 at the age of 83) but I don’t remember a time when I was not aware of his deeply engaging paintings and drawings. My first exposure to his work was most likely through print, perhaps in an art historical context or in the pages of books on Modern Art that I still have on my shelves. I am thinking that it may have been as far back as grade school art classes when we were encouraged to practice “automatic” drawing and writing as a path toward uncritical self expression that Twombly’s work first came into my consciousness. I do remember much later, standing in front of Twombly’s work at the Documenta 7 in Kassel, Germany, and feeling both elated and mesmerized by the canvases that barely contained a kind of childlike (for lack of a better word) scrawl (also for lack of a better word) that seemed scaled up in a way that no child could imagine or physically accomplish. Twombly’s titles alluded to an intellectual grasp of the world that was rooted in the ancients, in civilizations that cared about the gravitas of law and of ethics. It was rooted in the pleasure of literature by such authors as Rumi, Pound, Rilke, and Homer. 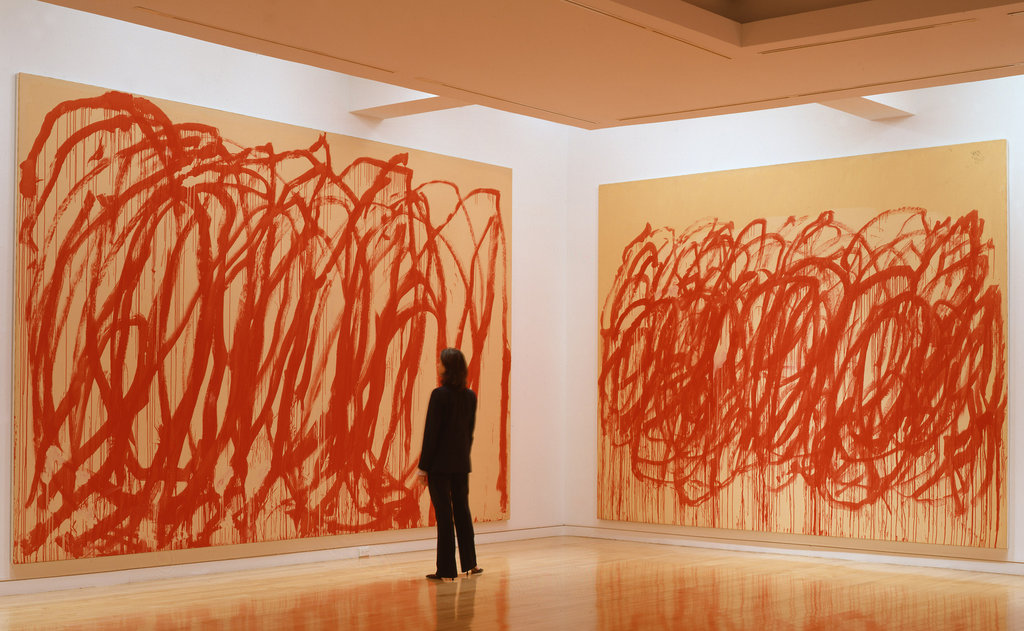 I don’t remember ever feeling adversarial to Twombly’s work, only enchanted.

I want to be challenged by works of art. But I also long to be mesmerized and swept away. As I think about the work of Cy Twombly, I imagine that such enchantment flows both ways; from the painter who is gazing both at and beyond the canvas and from (I) the viewer, gazing at the canvas, while pondering Twombly’s process and the clues to the Gordian Knot of the work, often found in his titles.

All of this relates to what Michael Fried calls, presentness and/or instantaneousness. He notes, “modernist art offers a rare gift of the exalted feeling of being fully present.” The work of art in question for Fried is always and forever apprehendable in a single glance, eternally present. That is how I experience the work of Cy Twombly; in a single glance I feel a sense of enchantment, the mysterious way in which it speaks directly to me, personally, singularly inspiring feelings that I would not imagine otherwise.

All of this is to say that for my 60th birthday recently, my wife and son presented me with a suite of four small Twombly drawings from the late 1990’s.  Unframed, in an envelope, and separated by sheets of plain paper, the four 8″x12″ drawings were immediately recognizable and in that moment of unveiling, Walter Benjamin’s notion of the aura of the work of art, the undeniable uniqueness of the thing itself, was made concrete.