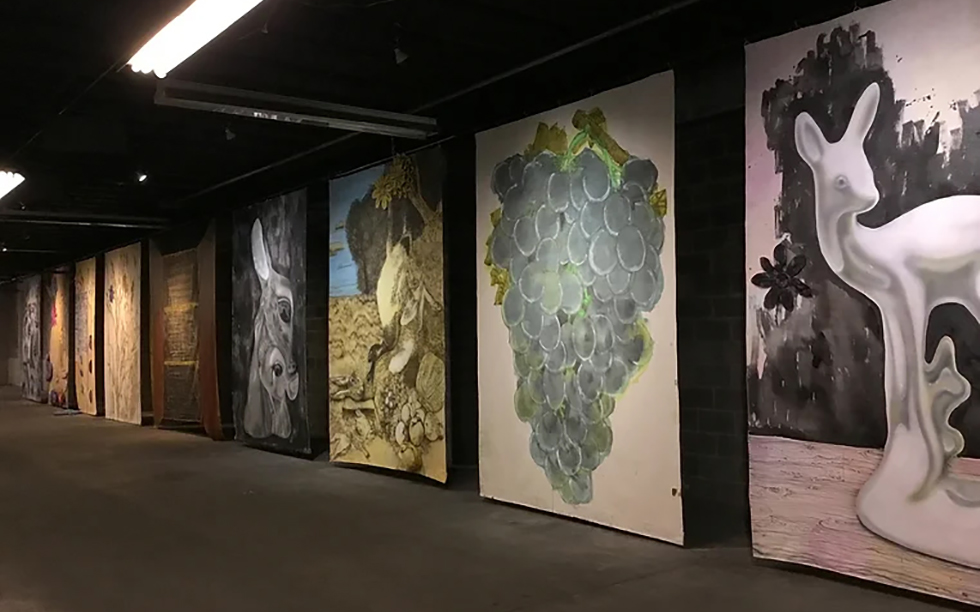 Throughout his varied subject matter, Peragine explores questions of strength and vulnerability, power and impotence. Since 2010 much of Peragine’s studio practice has revolved around an interest in the cultural and environmental aspects of natural history dioramas and taxidermy. In his prior exhibition “Little Creatures” he mined the great natural history dioramas made in the 1920-40’s, when the animals and environments were already in peril, often from excessive hunting. Believing the animals would be gone in twenty-five years, the goal was to get their skins before the animals went extinct – perversely ensuring their destruction.

Joseph Peragine’s work has been presented in galleries, contemporary art spaces, and museums throughout the country and internationally. Peragine’s public art installation of red ants in Atlanta’s Hartsfield Jackson International Airport is a favorite of millions of travelers. The scope of Peragine’s multi-disciplinary practice encompasses public art projects and commissions, including exhibitions at Art in General in New York City, Islip Museum of Art, West Islip, NY, Sunken Garden Park, Atlanta, and the permanent installation for the Hartsfield Jackson International Airport, Atlanta, for which he was also awarded an Atlanta Urban Design Commission Award of Excellence for Public Art, as well as being noted one of the best public art projects in 2001 in Art in America. In 2001 Peragine was invited to exhibit his work and participate in an international symposium on art and science in Beijing, China, hosted by Tsing Hua University and the National Museum of Fine Art of China. Peragine’s animations have been exhibited at the Palm Beach ICA, Florida, the Cheekwood Museum of Art, Nashville, TN, MOCA GA, Atlanta, GA, DiverseWorks, Houston, TX and the Arizona State University Art Museum Short Film and Video Festival, among others. His paintings, drawings and sculpture have been exhibited in galleries including Solomon Projects, Atlanta, Atlelie397, Sao Paulo, Brazil, David J. Spencer Museum at the CDC, Atlanta, Agnes Scott College, Dalton Gallery, Decautur, GA, Atlanta Contemporary Art Center, Florida Atlantic University, Boca Raton, FL, Polk Museum of Art, Lakeland, FL, the UA Museum of Art, and Kress Gallery, Tucson, AZ, and the Zuckerman Museum of Art, Kennesaw State University, Kennesaw, GA.

Joseph Peragine was born in Jersey City, New Jersey in 1961. He is the Director of the Ernest G.  Welch School of Art & Design at the Georgia State University, Atlanta, GA. He completed his undergraduate work in fine art at the University of Georgia, Athens, and in 1995 received his MFA in painting from Georgia State University, Atlanta. He recently completed a prestigious five year studio residency at the Atlanta Contemporary Art Center. josephperagine.com